skip to main | skip to sidebar

This interesting article appeared in the New York Times awhile back, but I thought it was worth posting now.
Posted by mat at 2:49 PM

On Thursday, March 27, Robert Redford will introduce a screening of Fighting Goliath: Texas Coal Wars for The Progressive Forum. After the screening, he will participate in a panel discussion with Mayor Bill White; Steve Susman, the Houston attorney who represented the coalition of Texas mayors pro bono; former Dallas Mayor Laura Miller; a Hallsburg rancher who appears in the movie, the film's director; and John Hofmeister, the president of Shell Oil Company and former chairman of the Greater Houston Partnership. We're grateful to Randall Morton, and the Progressive Forum Houston for hosting this special screening of Fighting Goliath. See you all there!

Fighting Goliath will screen this Saturday, March 29th, in Dallas as part of AFI. Jill Tidman, Executive Producer, and I will be there. Hope you can make it out. Follow the link for specific location and time.
Posted by mat at 9:36 PM

Welcome to the blog 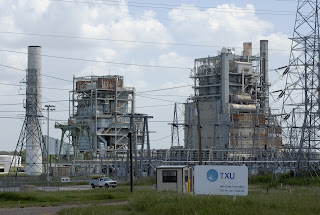 I've created this blog to keep up everyone up to date on the documentary 'Fighting Goliath: Texas Coal Wars'. Check here for happenings related to the film, as well as thoughts on the energy challenge of powering communities in a way that supports the economy and protects public health.
Posted by mat at 2:01 PM